Paul’s grandfather Joseph, born in 1880 and married with Emma Iffrig, whose ancestors are from Alsace, France, is owner of the  farm shown below on the left side, situated in Iffrigroad in St. Peters, Missouri. The picture on the right side is taken about 2006 in front of the Joseph and Emma Stahlschmidt’s farmhouse on Iffrig road. The car belongs to Herbie Iffrig who lives at the end of Iffrig road. 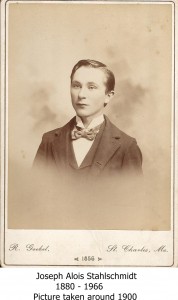 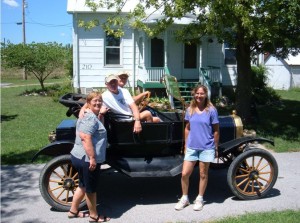 The farm is west of St. Charles, Missouri in the fertile flood plain of the Mississippi river and is approximately 100 acres. Joseph enjoys hunting very much and drinking a few beers as evidenced by the photo taken along the Dardenne Creek.
Joseph and Emma have five children. Their names are Oliver, Elizabeth, Louis, Joseph Rafael, and Albert. Oliver, Louis, and Albert have careers in the Aircraft industry, Elizabeth is an office worker, and Joseph (Joe) is a banker.
Joseph and Emma celebrate their 40th wedding anniversary in 1950 with their children (picture below). 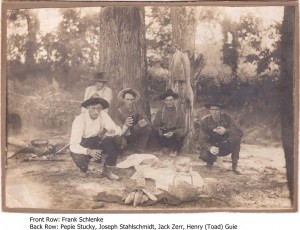 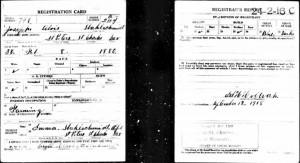 The above photo on the right shows Joseph’s registration. Below follows a picture of Joseph’s family in law Iffrig about 1890 and another one taken in 1893 of the students in All Saints School. Joseph Stahlschmidt and Emma Iffrig are identified. The picture of the car on the right was taken about 1940 on the driveway beside the farmhouse. 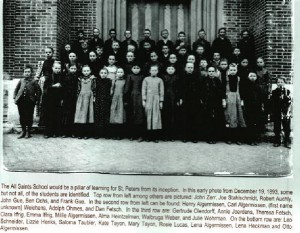 Below portrait of Aloys Iffrig, born in Niederlauterbach, Alsace, France who is shown above within his family. His wife Helene Schwendemann’s family orginates from Renchen, Germany. 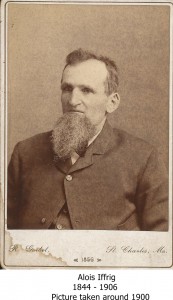