Augustina Christine Stahlschmidt was born on April 21, 1873, in St. Peters, Missouri. Her father, Englebert, was 39 and her mother, Mary Schulte Stahlschmidt, was 33.

On March 9, 1887, at the age of 53, Augustina’s father Englebert died, and was buried in St. Francis Cemetery, St. Charles, MO . Augustina’s mother, Mary, took Augustina (“Teena”) , who was 14, and Joseph, who was 8, to live with her in St. Peters. They lived upon the land inherited from Mary’s father, Franz Schulte, on the Dardenne Creek. It was not a fancy dwelling, but adequate for a small family.

At the age of 22,  “Teena” married Albert Ignatius Auchly on June 7, 1895, in St. Charles, Missouri. Ignatius  is  a grandson of the Swiss born Anton Auchly whose”emigration story” is to be found in the Archives of Luzern and has been published in the following article of the “Surseer Woche” (Emigration 1834).

Tina and Albert  had 4 children during their marriage. They were Eleanor, Isidor and Estelle. But after the last one, little Bertha was born, Mother Teena died. More changes now. Albert took the three older children to grow up in the home of his parents, but baby Bertha went to live with Uncle Marcus and Aunt Mary Auchly Schulte, who was Albert’s sister.

Teena died as a young mother on July 31, 1904, in her hometown, at the age of 31 from Bright’s Disease, i.e. Nephritis according to oral tradition, and was buried in the All Saints Cemetery in St. Peters, St. Charles, Missouri. Her gravestone is still in German language: “Hier ruht Augustina Auchly, geb. Stahlschmidt – 21 APRIL 1873, 31 JULI 1904″ 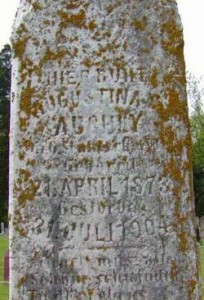 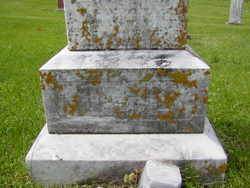 Hereafter you can see photos of Teena Stahlschmidt and her husband Albert Auchly including their wedding picture as well as her parents in law Ignaz Auchly and Catherine, nee Braun. Their children below were Eleonore, Isadore and Estelle. After the next one, Bertha, was born, Teena died. Albert took the older ones to grow up in the home of his parents, but baby Bertha went to live with uncle Marcus Schulte and Aunt Mary Auchly Schulte who was Albert’s sister. 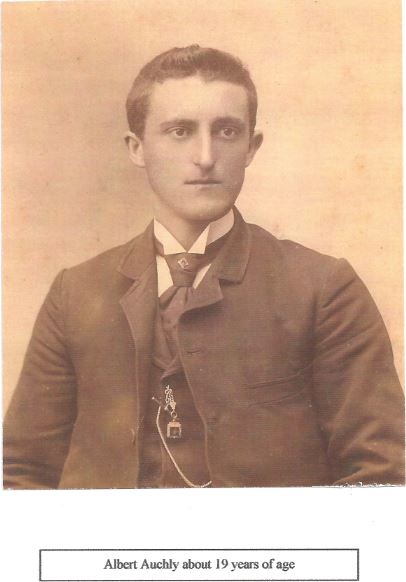 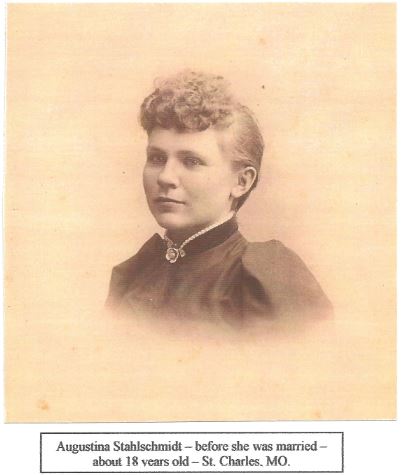 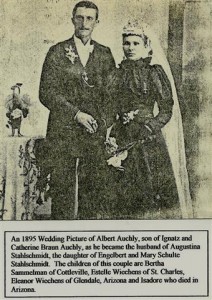 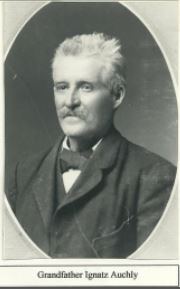 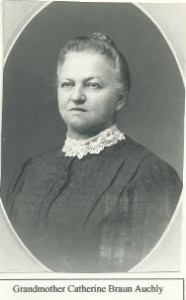 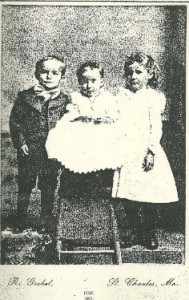 When clicking here on Auchli you will find Anton’s his birth, marriages, children and some descendants (see also the following file Stahlschmidt_Iffrig_Road).

You can read an interesting story about Franz Schulte’s daughter in law, the French born Josephine_Mercier_Schulte!

Augustina owned a wonderful brooch watch that is now in possession of her great granddaughter Lorayne. Look here: 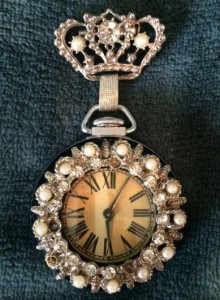